I have to say a *big* thank you to everyone who has left lovely comments about my wonky stars. It is so encouraging to receive them. I only got a couple of whole blocks and a some part blocks made during the week, so I played catch up today and now have have a dozen new blocks to share.  What do you think about the on point look?  It seems to make them look particularly wonky. 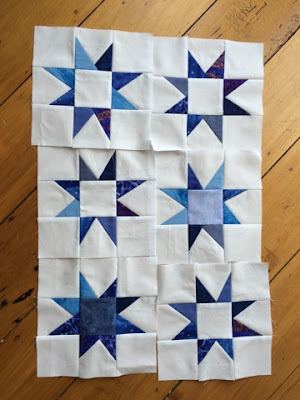 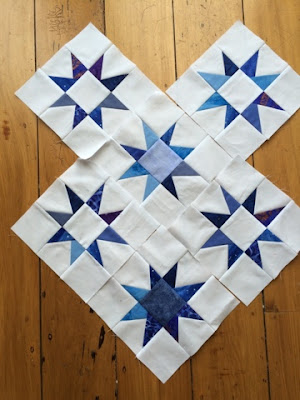 Here's my little supply of "star parts" ready to go.  This should be plenty to see me through to the end of the month. I'm not sure I'll be able to stop making blue stars when Angela at Scrap Happy changes the colour for the Rainbow Scrap Challenge for February.  I love seeing all the blue goodness everyone has been sewing on weekly linkup, here. 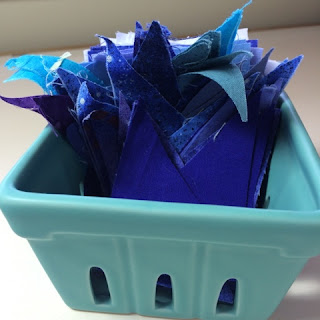 My Garden House quilt saw some needle time today too and I added three of these blocks.  I photographed all of them because I wanted to see the effects of the different fabric combinations.  I need 17 of these for the quilt.  They seem to take forever to make!  My favourite is the one with the red stripes. 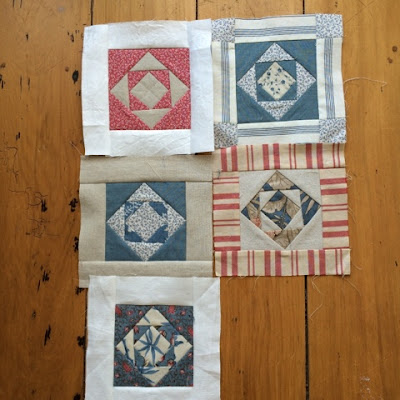 A little of bit of organisation


Quilting time is down now that I'm back at work.  But it's not going to be gone altogether.  I tried to do 30 minutes each night during the week so that things don't stagnate on my table.
I added six new wonky stars.  These are great to sew if you don't feel up to anything that requires careful measuring or calculation (eg after a ratty day at work).  I had some fun with these blocks, using white centres which adds a new dimension.  I also tried a string/crumb centre, which I was very excited about in my imagination, but very disappointed about in reality.  It looked very heavy and full of seams in the centre of the stars.   I loved those little crumbs though so I reused the piece as points on a couple of stars.  That was a much more successful effect.  I'm enjoying these blues.  I have always loved tone on tone blues, and have plenty of strips, even though much of my stash is in storage (that's a long story).  Anyway, here are this week's little stars for my Rainbow Scrap Challenge link.  Check out everyone else's blues on Angela's page here 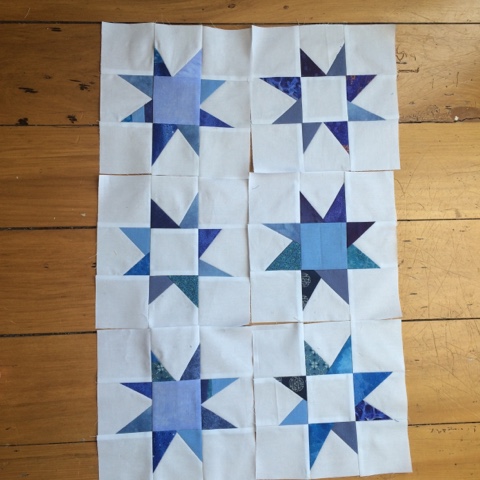 Allietare - I finally gave in an admitted that I was going to have to buy more black fabric to make the additional blocks needed for a larger quilt.  Yesterday I did that, and it allowed me to get my head into the right space to move forward with this.  I've been cutting, cutting, cutting, so that I can get on with making these blocks.  I *think* I have nearly cut everything I need.  I can't believe how long it took to cut the fabrics for the extra blocks.    This is my organised pile of *heedless geese* parts. 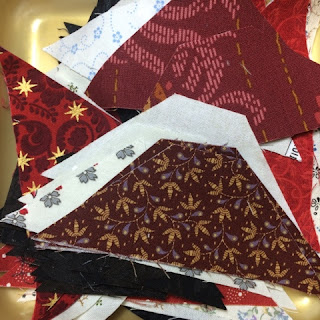 This week I will able to come home at sit at my machine without having to figure out what I need to cut and sift through piles of fabric.
at January 17, 2016 6 comments:

So 2015 has been and gone, thank goodness.  I didn't get much quilting done last year but I plan for that to be different in 2016.  I've begun by working on a few different projects because that seems to be the way that I enjoy quilting the most.

Scrappy Stars  - these are inspired by Angela's Rainbow Scrap Challenge.  I love making wonky star blocks and have pieced the around other bits of quilting.  They make me smile.  In 2014 and I did Angela's Rainbow Scrap Sampler which is still blocks, and ideas for sashing, but I learned so much from that project.  You can see the Challenge here along with what others are doing this year. 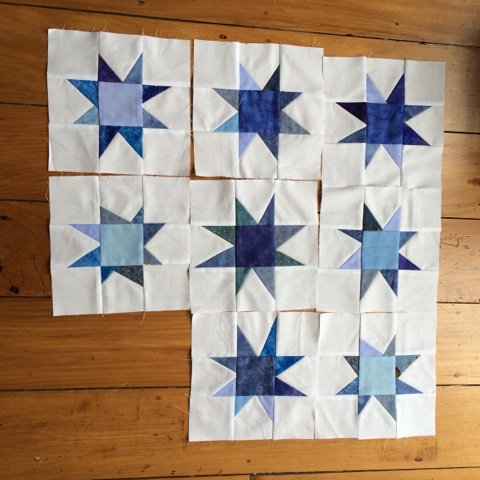 Allietare - Bonnie Hunter's latest mystery quilt available for a short time on her blog where you see lots of different versions of this.  I have (just today, whoop whoop) finished all my blocks.  I'm going to square the quilt off by adding an extra row so it will be a while before it all goes together. 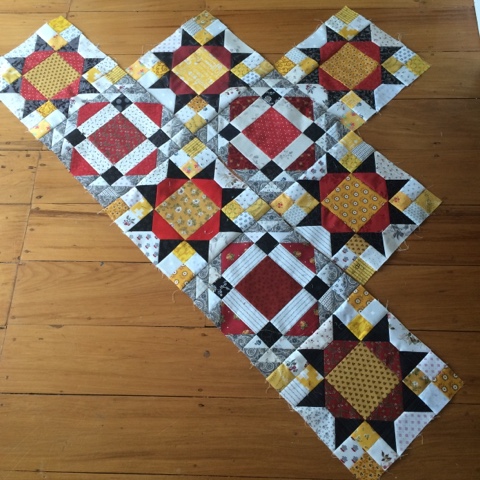 Garden House - hmm this is a washed out photo taken back in June when my BFF and I went to the beach for a week of sewing.  These past couple of weeks I've done some more work on these blocks.  I remade the house block to fix the colours and the skewed-ness, made some more blocks, carefully calculated my fabric *ie, did a guesstimate* and I think I have enough to finish it.  I fell in love with this quilt all over again so it  is staying out so that I keep it top-of-mind. 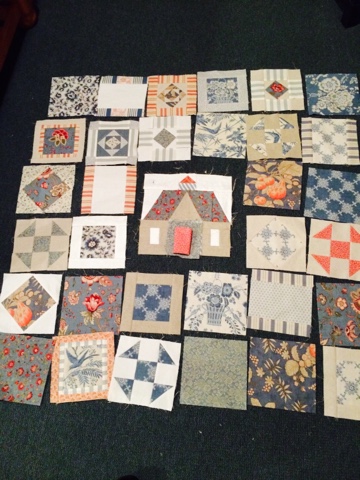 Quilt Along Sampler - In 2014 I started working on the Classic Meets Modern Quilt Along hosted by Erin at Sew At Home Mommy.  I was excited to use some of my hand dyed fabric, and full of good intentions for this sampler but I run out of steam about half way through the year.  It became another part project in a box and I had some feelings of guilt about the poor neglected blocks that I hadn't got round to making.  The more I thought about it the worse it got.  Hmmmm....  Time to reevaluate.  I had listened to podcast recently about just this very topic... moving on the UFOs.  So I laid out what I had done an assessed where it was at.  Looked at the fabric I had.  Looked through the blocks patterns that were left in the Quilt Along and decided that I didn't want to make those... not that there was anything wrong with them, but I had looked at them too many times thinking "I must...." and I was bored with them.  I chose some new blocks to make from other web based Quilt Along and pattern sites.  I've now made 9/12 blocks.  I've cut pieces for the 10th, have a list of the remaining blocks and the website addresses for them, and have chosen a setting, which I have the fabric for.  This UFO is moving on.  So here is the before photo.... when I've made all the blocks I'll update with an after photo. 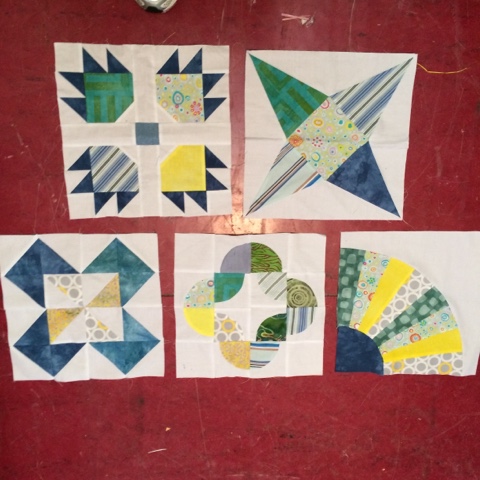 I think I could have called this post "Pot Luck" because there's a little bit of everything in here LOL.  It should make for a fun, quilting and creative 2016.

My sewing at the moment seems to be focused on a couple of quilt-a-long projects I've joined. For a while now I've wanted to use u... 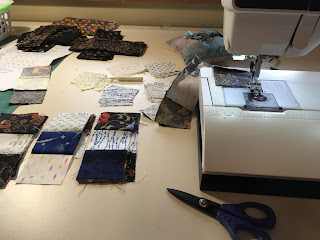 Lisa
I'm a kiwi girl who works full time and fits in quilting around the edges.